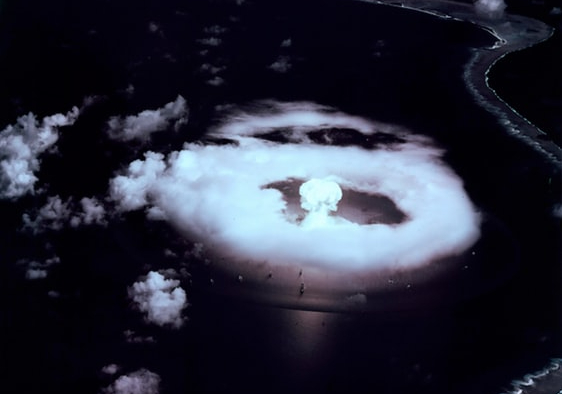 Since WWII, humans faced a nuclear Icarian paradox: progress or annihilation. Our technology can refine fissile material in a way that the controlled release of nuclear energy could create abundant peaceful energy, or – when released all at once via state vs state launched intercontinental targeted missiles – will ensure nuclear retaliation and global extinction. To negotiate the political terrain of nuclear reality, humans have developed a modern, multi-lateral international society. However, it is not clear whether this will be enough and, like Icarus, we may yet burn up in the sun …

Today, it is estimated 13,410 nuclear warheads (type independent) exist, an 81% reduction from the Cold War peak of 70,300 in 1986 (FAS 2020). However, this reduction is rendered somewhat moot by manifold advancements in fissile material refinement (which are no longer restricted to one Uranium-235 i.e. plutonium, thorium, etc.), stockpiling (IPFM 2015), and missile delivery.

We have never been closer to nuclear anihilation than today – even more so than at the height of the Cold War. The famous ‘Doomsday Clock’, which tracks the time at which nuclear anihiliation of the human species will occur, is the closest it has ever been: 100 seconds to midnight (BAS 2020).

This may sound strange given the lack of coverage in world media, especially considering all the oxygen the Trump phenomenon sucks up. However, nuclear security has never been more relevant. Why is this so? Well, let’s just say several recent events should keep us all up at night -namely that their consequences now threaten the stability of the Nuclear Non-Proliferation Regime (NPR) which guards the world like a suit of armor.

One such event happened last year – the Intermediate-Range Nuclear Forces Treaty (INF), a stalwart Cold War treaty signed between the United States and the now extinct Soviet Union – dissolved in front of our eyes after 30 years. Amongst a rising tide of states willing to use nuclear weapons, political instability, and increasing technology, one of our key safeguards against nuclear missile launching has now evaporated largely due to Russian aggression.

At the time of the INF breach, it was discovered that Russia had developed and tested its new nuclear-capable missile, the SSC-8. This missile is incredibly dangerous, as it can be launched from a small infantry unit and carry up to 450kg of nuclear fissile material with a range of 2,500km (MDP). To put this into perspective, imagine a series of ground troops capable of launching a nuclear missile at a city, rather than from monitored silos, submarines, or safeguarded nuclear complexes which are held in check by international society. Add to this nuclear simulations conducted by Russia against Sweden and NATO allies (Stoltenberg 2015) and the gravity of the situation begins to take hold.

These events have potentially reignited a nuclear arms race between Russia and the US, as well as catalysing the ramped up response from NATO’s global defence operations in all theatres of land, sea (including nuclear submarines), and air (Stoltenberg 2019). Russia is not the only destabilizing agent in geo-dynamic nuclear security considerations, but they remain one of the largest today.

Many are heralding the recent signing and ratification of the Treaty on the Prohibition of Nuclear Weapons (TPNW) as a victory and insurance policy, with the assumption that the nuclear club and non-nuclear weapon states will be finally forced to ‘play nice’. However, this is just a treaty (although an incredibly important and historical one) and the hydra of politics, positioning, and force remains unintimidated.

Mohsen Fakhrizadeh, a high profile and senior official in the Iranian nuclear program, was assassinated in November. As a result, the head of Iran’s parliament energy committee Fereydoun Abbasidavani has signaled Iran should increase uranium enrichment, end IAEA cooperation and expel its inspectors, and continue withdrawal efforts from the JCPOA (Tehran Times). In addition to this, Russia has again breached US cybersecurity defences via a coordinated hacking campaign on The Energy Department and National Nuclear Security Administration (which maintains the US’s nuclear stockpile) (Politico 2020).

All this is occurring as The Treaty on the Non-Proliferation of Nuclear Weapons (NPT) is losing the faith of its adherents as a key bulwark of the NPR on the multi-lateral/international stage. The point is: for each step human society makes towards avoiding nuclear annihilation, we seem to be taking two steps back. However, not all hope should be lost. If you keep returning to this series, dear reader, we may just make sense of modern nuclear security events yet. The next instalment of ‘Nuke News’ will cover the science of nuclear weapons.

Mecklin, J. (2020) ‘Closer than ever: It is 100 seconds to midnight’. Science and Security Board Bulletin of the Atomic Scientists. Available: https://thebulletin.org/doomsday-clock/current-time/